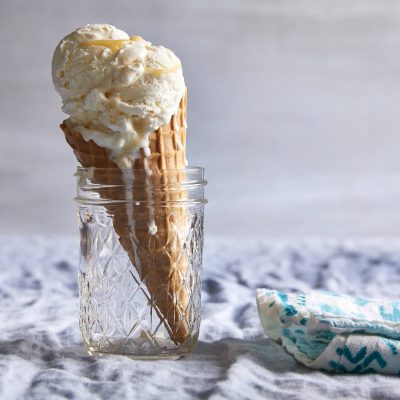 Your name doesn’t have to be Ben or Jerry to dream up wildly fun ice cream flavors. Amazing ice cream doesn’t have to come from a specialty shop or the freezer aisle either. You can make homemade ice cream in your own kitchen with natural ingredients, an ice cream maker—and a whole lot of imagination.

We asked our Facebook fans to unleash their imaginations with ideas for fantastical ice cream flavors during the Name Your Flavor Contest. After thousands of entries, three flavors emerged as the undisputed crowd favorites: Honey Butter Shortbread submitted by Amy L., Chai Toffee Chip submitted by Fiona T., and Blueberry Waffle Cone submitted by Leslie I.

Start With a Basic Vanilla

It was up to Tim Hagedorn, a food and trend innovator at Pampered Chef, to turn these yummy ideas into real ice cream flavors.

“These recipe concepts were so good, they practically wrote themselves,” says Tim. “I wanted to make sure that all of these recipes had exciting textures, flavors, and visuals.

“For the Blueberry Waffle Cone and Honey Butter Shortbread, I used vanilla ice cream as the base because I didn’t want the lighter flavors of the honey or blueberries to be covered up in any way.”

That basic recipe uses only four natural ingredients. And when you make ice cream yourself, you decide how decadent or light you want your flavor creation to be.

Tim says the Blueberry Waffle Cone ice cream challenged him the most. It took him a week to get the ice cream recipe just right.

“Blueberries have such a subtle flavor,” says Tim. “That’s why I cooked down the blueberries to extract some of the water. Then I added just a little bit of buttermilk because the acidity really helps boost that flavor.”

Test Kitchen Tip: To make blueberry flavoring, add 1 pint of blueberries, a ½ cup of sugar, and 1 tbsp of water to a small saucepan. Simmer the mixture over medium-low heat for 10 minutes, stirring occasionally. Then remove the blueberry syrup from heat and chill for two hours. Add your blueberry mixture to the Basic Vanilla Ice Cream recipe.

If you’re tired of salted caramel everything, then this Honey Butter Shortbread flavor might be your new favorite. For the base ice cream, Tim used the vanilla ice cream recipe and replaced ¼ cup of honey for ¼ cup of the sugar and added ¼ tsp of salt. Salt, in tiny amounts, enhances the sweetness and creaminess of the other ingredients. That’s why salted caramel tastes so good, too!

Test Kitchen Tip: Add a flavor swirl. Whisk ¼ cup of honey, 2 tbsp of softened unsalted butter, and ¼ tsp of salt in a prep bowl until it’s smooth. Once the honey-vanilla ice cream base is churned to a soft-serve consistency and you’ve added the shortbread cookie mix-ins, gently stir in your swirl mixture using a scraper.

“I knew the richness of the frozen custard would be perfect for all the spices of chai tea, and the buttery flavors in the toffee,” says Tim.

To get the most out of your ice cream maker, follow these easy tips.

Experiment and Have Fun

“It was so much fun to work on these recipes,” says Tim. “Any one of them could be a summer classic for years to come!”

So, go ahead, make your own crazy custom ice cream at home. Experiment with these Test Kitchen tips for yourself. Simmer other types of fruit into a concentrated syrup or steep matcha or lavender tea bags instead of chai. It’s your summer treat, so you call the shots. Which of these three flavors would you make at home? What’s the craziest ice cream flavor you’ve ever eaten? What’s your favorite ice cream mix-in of all time. Leave a comment!

How to Build a Burger Bar
How to Feed Your Picky Eater: 10 Quick Ideas

17 Responses to Behind the Scenes: Making Ice Cream Flavors