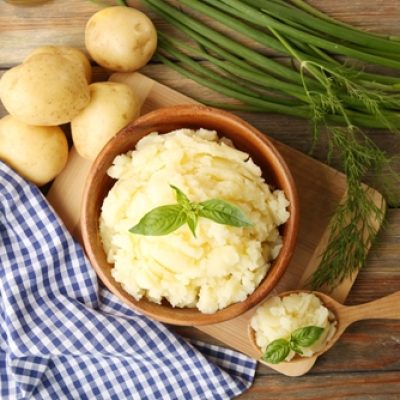 February is National Potato Lover’s Month, and every carb enthusiast out there should be excited to dive into some starchy goodness in celebration. However, if you’re trying to pay attention to your health, you might run into some trouble. Although potatoes aren’t exactly unhealthy in and of themselves – and in fact, have plenty of vitamins and nutrients – most of the ways people prepare potatoes are a little bit … indulgent. Potato recipes tend to include lots of butter, cheese and bacon: ingredients that are fine in moderation, but probably shouldn’t make up the majority of your diet.

Fortunately, potatoes don’t have to be an artery-clogging affair. Here are a few potato (and potato-alternative) recipes you can use to celebrate Potato Lover’s Month without sacrificing your health:

Sweet potatoes are the perfect alternative to their less-healthy cousins. It’s easy to assume that sweet potatoes would be a little less good for you, what with “sweet” being right in the name. However, don’t let this tasty treat fool you – sweet potatoes are chock full of vitamins and nutrients. In fact, a single sweet potato contains about 1,400 times as much vitamin A as a white potato does. Moreover, sweet potatoes contain significantly fewer calories than white potatoes do, so they’re basically a super food.

To make baked sweet potatoes, start by heating the oven to 400 degrees Fahrenheit. While the oven is heating, poke your sweet potatoes a few times with a fork, so the skin has some holes. Place your potatoes on a baking sheet, and let them cook for 40 minutes to an hour. You may need to keep them in longer, depending on how well-done you like your sweet potatoes. Remove them from the oven, let them cool, and then add your favorite healthy toppings!

Not sure how to best deck out your treat? If you have a sweet tooth, play up the potatoes’ natural sugariness with cinnamon and raisins. You can also create a nice flavor combination by stuffing your sweet potato with arugula, and then squeezing some lemon juice over top. Or, if you enjoy mixing sweet and savory flavors, you can top your sweet potatoes with roast beef and gravy – a healthier take on some classic comfort food.

“Healthy potato skins” might feel like a bit of an oxymoron, but that’s because you’re picturing bar food. The potato skins you’d get at your local sports bar are about as far from healthy as you can get. If prepared correctly, however, you could easily make potato skins fit into a healthy lifestyle. After all, potatoes’ impressive amount of fiber is mostly found in the veggie’s skin. Since many people avoid potato skins in favor of the mushier creamier centers, making yourself a healthier version of this bar standard is a great way to take in some extra fiber.

The first thing you have to do to make potato skins is separate them from the insides. Poke your potatoes with a fork several times, and then stick them in the microwave for about 10 minutes. Let them cool, then slice them in half and scoop out some of the insides. The thinner you make the skins, the crispier they’ll be: If you’re not sure where to start, try to leave about 1/8 inch of flesh. Use a basting brush to coat the insides and outsides with olive oil, then bake at 450 degrees for about 20 minutes. While they’re in the oven, get your toppings ready.

You can top your potato skins with nearly anything you can bake at higher temperatures (you’re going to have them in the oven at 400 degrees). One shockingly health-conscious recipe you should consider: potato skin veggie pizzas. I know, it sounds crazy that combining two characteristically unhealthy recipes will leave you with a healthy one, but the trick is that you’re removing what’s unhealthy about both. In the case of the skins, you’re swapping out butter, bacon and sour cream for lots of veggies and protein-packed cheese. Pizza’s only real drawbacks are whatever you put on top (which you control in this recipe) and the empty calories of the dough underneath. When you swap that dough out for nutritionally dense potato skins, you end up with a powerhouse of a meal.

Remove the potatoes from the oven, and lower the heat to 400 degrees. Place your toppings (to make potato skin pizzas, spread a thin layer of pizza sauce over your partially-cooked skins, then sprinkle mozzarella cheese and top off with some sliced veggies), and stick them back in the oven for another 5-10 minutes.

Although potatoes do offer plenty of nutrients, if you’re looking for low-calorie or low-carb options, they might not be your best bet. Fortunately, you can still satisfy your mashed potato cravings without using potatoes at all. Mashed cauliflower comes out looking, feeling and tasting incredibly similar to its starchier counterpart. It’s also super easy to make – you basically just follow your favorite mashed-potato recipe, but swap out the main ingredient. Boil until tender, mash and add your favorite ingredients. Voila!

The only real trick to these is getting them nice and smooth. Lumpy mashed potatoes don’t look or feel the same as lumpy cauliflower, so you’re more likely to catch on to the differences. To get it well-mashed, start with your Mix ‘N Masher, and if you can’t get it to the right consistency, you can finish it off with a hand or stand mixer.

7 Ways to Celebrate Galentine’s Day
Eat This, Not That: Healthy Snack Alternatives